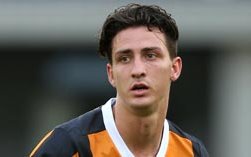 Hull City youngster Greg Luer has today made the switch out to Maidstone United on a loan deal.

The 23 year old striker heads to the National League until the end of April and he’ll be looking for some good game time at The Gallagher Stadium during the end of season run in.

It will be his fourth loan spell away from the KCOM Stadium since he joined us, having had previous spells out with Port Vale, Scunthorpe United and Stevenage.

He has two appearances to his name this season, and nine appearances overall for Hull – with a return of two goals.