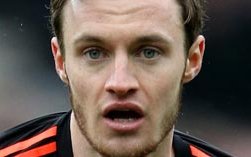 Will Keane has said that he believes increased competition up front can only help Hull City to a strong finish in 2017/18.

With Hull entering the international break with a defeat to Birmingham City and seeing the run of back to back victories end at two, the positive is we are six points clear of the main relegation battle but we have to keep growing that as a couple of slip ups will see us right back in the mix again.

Speaking to the Official Site this week Keane spoke about the ‘healthy’ competition for the striker spots with him battling against Nouha Dicko, Fraizer Campbell and fit again Abel Hernandez looking for Nigel Adkins’ selection each match.

The 25 year old insisted that it could only be a good thing for the club as it keeps everyone on their toes.

‘It’s healthy competition. They’re all great lads and everyone is desperate to play, as I am myself. I think we all have different attributes and if we can all contribute in different ways at different times, then I think that will only benefit the Club. Abel has made his comeback from injury recently and he’s done brilliantly. He’s scored a few goals and it’s great to see the smile back on his face. He’s a natural predator and that’s what we’ve missed at times this season.’

The former Manchester United attacker went on to say.

‘Hopefully we can all help and push each other to be amongst the goals in order to help the team get the results needed to stay in the Championship. We’ve had a lot of games recently and the gaffer has had to rotate his squad a lot, but he can only pick so many players. We all know there’s nothing personal in it and he picks the players that suit the challenge we face in our next game. We all just need to keep working hard and make sure we take any opportunity that comes our way. It’s not an easy job for the gaffer when he’s got so many strikers at his disposal but everyone wants to chip in and play their part – and that can only be a positive.’

With Hernandez making an impact after returning from his injury, Keane said he was as hungry as ever having spent 14 months on the sidelines with his own cruciate ligament injury and he desperate to get himself back on the scoresheet.

‘I’m feeling good fitness-wise – I’m just looking to get that all-important first goal here now. It’s not happened yet but I feel as though I’m getting in the right places. I’ve had a few chances come my way but I haven’t been able to take any of them, which has been frustrating.’

‘As I say though, at least I’m getting the chances and I’m confident I’ll put one of them away very soon. I’ll keep going and keep believing that it will come. Obviously as a striker, you want to score goals because that’s how you build confidence. But I know can also help the team in other ways. I’ve chipped in with a couple of assists and, with my game, I know I can help the team in many different ways, but I do want to be scoring goals.’