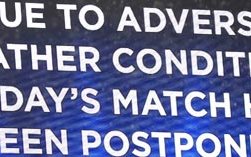 Hull City were due to be at Portman Road as the visitors to Ipswich Town for the latest league match this weekend.

The game was set for a 3pm kick-off however, due to the weather conditions in recent days during the build up to the game, this match has now been postponed.

The decision was taken earlier today following a pitch inspection and although it was believed the pitch would pass muster for the game, the surrounding areas around the ground were deemed to be problematic and unsafe for fans attending the game.

Following discussions between both clubs and the EFL, a revised date on Tuesday March 13 has been selected in the calendar and the match will kick off at 7.45pm.

Tickets purchased for the game remain valid for the rearranged date, but refunds are obviously available.